After the last post, things got ugly. When all was said and done, we made it home at about 1:30am, capping off a 22-hour day. The cherry on the top was getting to the vehicle at about 1am and finding the battery dead. The parking lot was well equipped (thankfully) and we were jumped and on our way in no time.

I have been wondering how to break down the trip into meaningful LJ posts. I think doing it by subject as opposed to doing it chronologically would be best. So let's start out by the cruise itself. Some of you have cruised before, others not. When I was a youngin', cruising sounded boring. Vacations were meant to be opportunities to see exotic places and climb mountains, not sit in a lounge chair by a pool. After taking my first cruise, however, I could see the attraction of it, especially as my desire to spend a freezing night in a tent waned considerably. Actually, a cruise is a lot like a furry con. You tend to spend most of your time in one place while there are events going on all around you. It's much better to attend with friends, but there are opportunities to make many new ones as well. Several times I had feelings similar to those I have had a cons especially at our port of call in Costa Rica where there was plenty of time to explore the area, but it was so hot and humid after coming back from our excursion that all I wanted to do was grab a drink and dive into the cool pool. There were also times when I was so exhausted, buzzed, or suffering from food coma that all I wanted to do was crash in bed despite wanting to go listen to some music or hang out somewhere and be social.

Our ship was the Celebrity Century which is one of Celebrity's older and smaller ships. It had to be small in order for it to fit through the Panama Canal. Our cabins were in a perfect location; just below the deck with the buffet, right near a stairway, and very close to the Sunset Bar where we spent a great deal of time. As I had mentioned in an earlier post, we had opted for the all-you-can-drink alcohol package, and we were going to make them pay! Actually the package also included sodas, lattes, and bottled water, which we also consumed in mass quantities. I loved the fact of not having to worry about the cost of drinks which made it more likely to go hang out at various lounges to get different experiences. It was easiest, however, to just go to the Sunset Bar at the back of the ship (Deck 11) to enjoy the open-air experience. Hugh, the bartender from Jamaica, became our best friend. He always gave us full pours and treated us well.

The Cova Cafe was the place to go for espresso or coffee with a "nudge." It was always a place to head to after (or before) breakfast for some "real" coffee. Speaking of breakfast, the meals on board were incredible. Celebrity is known for having good cuisine, and they did not disappoint. You had a choice of just grabbing something off of the buffet, or going to the dining room for a sit-down meal. I think we pretty much divided our time equally between the 2, although dinners tended to be in the dining room while breakfasts and lunches mainly at the buffet. The fellow cruisers were definitely an international mix. This made for some interesting dining with buffet stations for curries, Mongolian BBQ, and English breakfasts. I tried my best to eat healthy on the trip, so I limited snacking, only took one reasonable plate, and ate as much fish as possible. Occasionally, however, I just had to grab a slice of pizza from the pizza buffet during the mid afternoon.

The weather for the trip was spectacular. There was drizzle on one morning near Mexico, and one downpour in the Caribbean. Of course the Tropics were hot and steamy. We made it as far south as 7.1 degrees N latitude off the coast of Panama. Yes, I geeked out with my GPS connected to my laptop.

Christmas and New Year's aboard a ship was quite an experience. For Christmas there was a lovely brunch buffet and caroling in the main atrium. For New Year's there was a party on the pool deck. We also decorated our rooms with Xmas lights. They showed Xmas movies in the small movie theater, but we missed all of them. I even brought Xmas dvd's but never even watched them.

There are just so many fun little details I could write about, but it would make an already long post even longer. The next big post will be about the various ports of call we made along the way.

Here's our ship along side the Island Princess in Puntareans, Costa Rica. 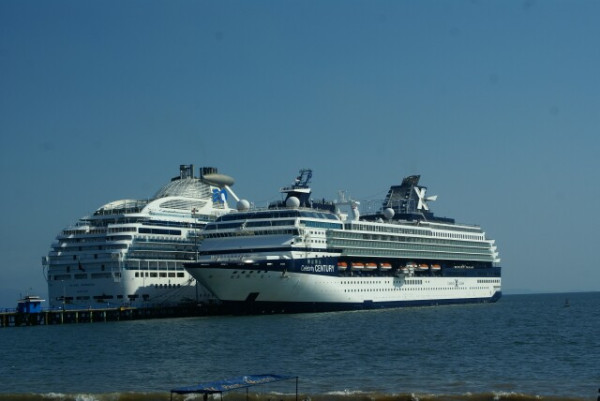 Here we are hanging out at our usual place, the Sunset Bar, with Hugh the Bartender 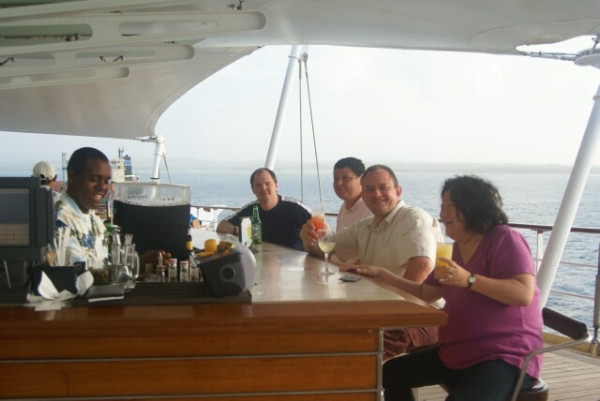