The days at sea were actually quite enjoyable. There was no hurry to do anything. It was nice lounging around, swimming, listening to lectures, drinking, drinking, more drinking. *lol* At most ports we had a shore excursion already booked. Here is a discussion of the first few ports.

Cabo San Lucas: Kitty and I had already been here several years ago on our first cruise. My impression of the place was, "The Lake Havasu City of Mexico." It's just lots of bars and jet skis in a desert environment. Since we had already been to the major natural landmark of the area, the big sea arch, we let the boys do that trip while Kitty and I took a trip to Todos Santos, a small town about an hour north. It was nice to see the desert and the areas not associated with gringo resorts. There was nothing much to the town, but it was nice to just get out and walk around. Lunch was at the Hotel California which consisted of really bad "gringofied" Mexican food. We had a pretty good tour guide, however, who provided us with a lot of insight into the local culture. When we got back to Cabo, all we wanted to do was get back on the ship and relax.

Puerto Vallarta: Once again, Kitty and I had been here on a previous cruise. None of the shore excursions seemed terribly interesting with the exception of the whale watching tours which seemed to have been sold out. One thing we had joked about was that we had remembered a large Walmart just outside of the ship terminal. Hey! That would make a fun excursion! I also noted that there was a Costco about 1.5 miles away. Let's see how things compare! The trip to Costco became known as the Bataan Death March. It was probably closer to 1.8 miles and the weather was very hot and humid. The route had very little shade, so we baked in the sun for about 40 minutes. The Costco was pretty much the same as a US Costco. I was most interested in seeing different food items. It kinda made me sad to see so many American products. Do we really dominate THAT much of the market?!?

Even though everyone was hot and tired and wanting to take a cab back, we ended up slogging our way back to the ship. Kitty and I, however, made our way to Walmart. It was fun to see all of the Mexican shoppers frantically buying last minute Christmas stuff (it was Xmas Eve, don't forget). What I found most amusing was that the store was pretty much identical to any other Walmart in New Mexico except that the signs were Spanish/English as opposed to English/Spanish. Heck, we even found out at the checkout that we could have used dollars if we had wanted. I guess MANY cruise passengers make the trek across the street to check out the store. I would have liked to have bopped into Sam's Club to see how it compared as well, but by that time even I was getting dog tired. And now...PICS!

Whale fursuit at Cabo. There was a much nicer turtle suit at Puerto Vallarta (but no pic) 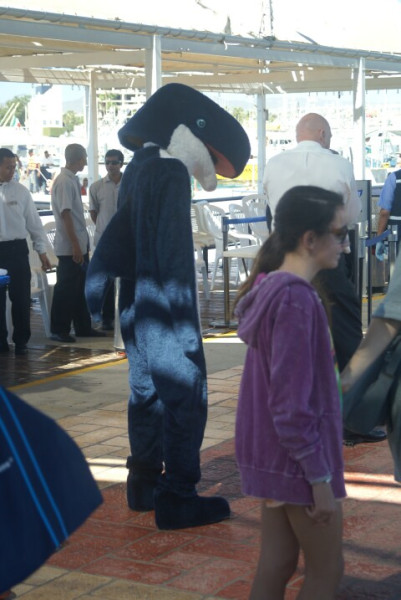