So where did I spend the last day of 2013? The Panama Canal! In fact our ship was the last cruise ship through the canal for the year. Talk about a long day! The captain had told us the night before that we had a slot to enter the Canal at around 7 am. Of course every ship that passed through the Canal had to have an appointed time to get in and out. Your slot position could also be influenced by how much you paid for the privilege. Our ship was paying $333,000 in tolls to make the journey which was based on number of passengers and crew.

We were up before sunrise to watch as the ship entered the harbor and the mouth of the Canal. Panama City looks to be an incredible place. I wouldn't mind going back to see for myself. The forward deck was crammed with people. Many tards had lined up deck chairs which created chaos. *shrugs* We managed. We passed under the Bridge of the Americas and made our way to the Miraflores Locks. We made 2 "steps" up and headed for the Pedro Miguel Locks for the 3rd step. It was then under the beautiful Centennial Bridge and into the Culebra Cut. By this time the crowds had dissipated and people went about doing typical ship stuff. Not me. This is what I had come here for! I wanted to soak up every second of the experience. In fact I was flabbergasted as we started the journey through the Canal and a few people were sunning themselves by the pool. Why did you take this cruise?!? As we made our way across Lake Gatun, I took up position at the front of the ship which had now been largely vacated. I had front row seats as we descended the 3 steps of the Gatun Locks. For the last step I went to the back of the ship to hang out with Al, Dex, and Scritch on one of the lower levels. It was neat to be so close to the action. I was able to touch one wall of the locks, run to the other side of the ship, and touch the other wall. Talk about a tight fit! (that's what she said!) It was so tight that one balcony scraped the side, leaving a nice ding. An overhanging security camera also got pwn3d, much to our amusement. All in all the transit took about 10 hours. I was sunburned and exhausted as we exited the Canal. Of course another reason for taking this cruise at this time was that the expansion of the Canal was going full steam. We saw the construction of the new, larger locks from a distance. We would get a closer view the next day.

Somehow Kitty, Scritch, and myself managed to stay awake until midnight to welcome in 2014 with a champagne toast around the pool where the main party was being held. It certainly was a memorable experience. Unfortunately we had a tour bright and early the next morning, so we retired to our cabin soon after midnight. And now...PICS! 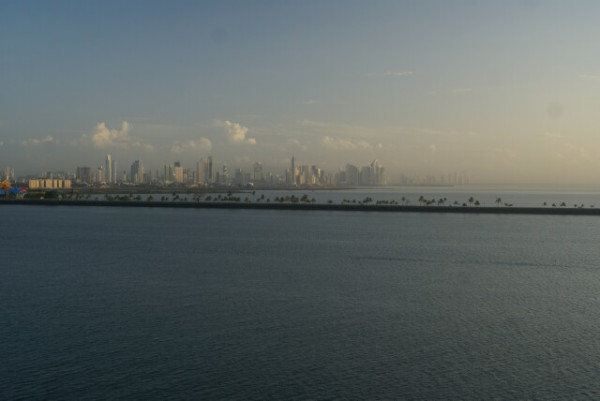