The last 2 remaining ports of call were Colon, Panama and Cartagena, Columbia. I'm not sure what the ship did on New Years Eve seeing that Colon is the port on the Caribbean side of the Canal. We must have just done circles out in the Caribbean all night. In the morning, however, we were docked in the city of Colon. I can see where the city got its name because it certainly looked like a shithole. Parts of the city I saw from the bus looked like post-Katrina New Orleans. From what I had heard, most people living there don't pay any rent. The government wants to do massive urban renewal, but can't as long as people are living there. So basically it was an example of benign neglect in hopes that people will move out.

The main purpose of the tour for the day was to see the old Gatun Locks and the new locks under construction. It was interesting to see the locks from "the other side" as opposed to actually being in them. We then went to the visitors' center for the new construction. Since it was New Years Day, there was no work going on. Part of the center included a nature trail through the rainforest. It was short but interesting. The only wildlife we saw were some leaf-cutter ants. I was the only one to get a glimpse of a coati strolling through the center's grounds. It was then back on the bus to get back on the ship. Before heading back on board, however, we made a quick stop at a local supermarket. We bought some local coffee and some candy. It was nice to be able to pay with dollars since they are still the official currency.

The last port of call for our cruise was Cartegena, Columbia. I was able to bag my 6th continent! I must say that it was probably the nicest city we visited on the trip. Even if we were just shown the good parts, it was a darn nice place. The old town definitely had a European charm. It reminded me of the good parts of New Orleans. We were constantly being bombarded by peddlers, but there was nothing we really wanted to buy. We couldn't get anybody lower than $7/lb for coffee which was a ripoff. Heck, you can get Colombian coffee at Costco here for $4/lb. About the only thing we regret not purchasing were flutes in the shape of dicks. I'm sure Albear or Dexter will post pics when they get around to posting about the trip. It would have been so worth it to buy one just for the WTF-factor.

Ships anchored off the coast of Panama 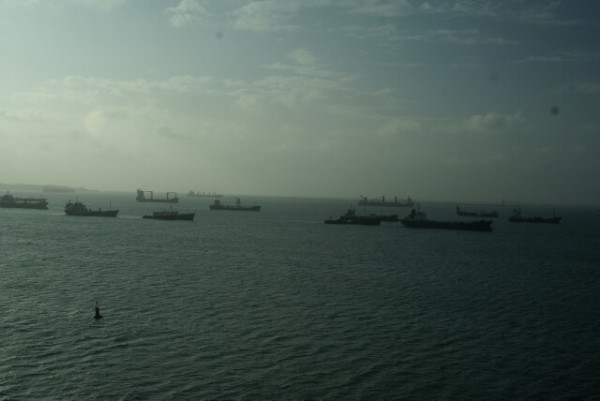