It's a little sad to say that I have been losing the fursuiting magic over the past year or so. There was a time where I would be out there performing at the drop of a hat. Now I choose my events much more carefully and cherry pick the best where there would be the greatest opportunities to interact with people in a fun setting. We have a couple of new fursuiters in our group who have never performed outside of a furmeet and were dying to get a chance to test their mettle. Kitty saw that Wildlife West was having their annual Wind Festival and suggested that it would be a great opportunity. On the one paw it would be a great way for me to introduce others to the joys of suiting for the public since this was my first event outside of a con way back in 2003. On the other paw, events at Wildlife West tend to be very boom or bust. I have had some great performances and some real duds. Needless to say that my emotions were running about the same. I ended up feeling pretty "meh" about the whole thing, but I went ahead and did it. Fortunately things turned out wonderfully.

One of the new suiters, Lupe, brought his 2 kids, his wife (who is also a fur and made his suit), his niece, and his mother. Another new fur brought his son, and some fur-loving friends brought their son. I gave them a tour of the park, which the kids loved, and then 3 of us got into suit. Since it was a wind festival, I got to fly a kite (appropriately fish-shaped) in suit. There weren't too many other kids around, but we had our own little entourage. So all-in-all it was a very nice day. The temps were warm, but not too hot. A constant breeze kept everyone cool. And everyone had a fun day out in the sun. 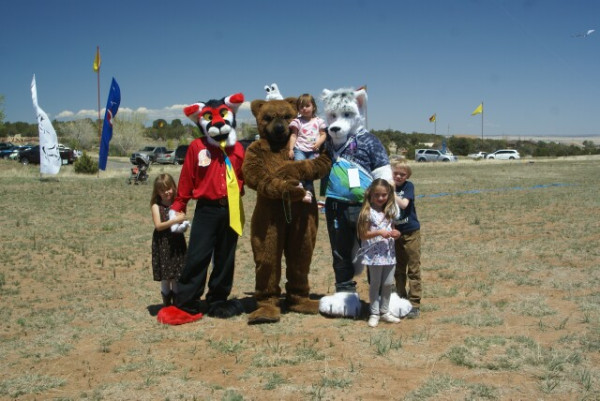