So today Albear, Kitty, and myself went the La Brea Tar Pits. I hadn't been there since 1980 and my inner geo-geek demanded it! It was a very worthwhile trip! There weren't that many people there and the docents were VERY helpful and friendly. Sure, the museum was a little dated, but I almost appreciated that more. Like I mentioned awhile back about zoos these days where they want to beat you over the head with education in a meaningful and politically correct manner. This was just a great place to be a science nerd. I kept thinking about

farraptor when he did a fursuiting outing there. *jealous* What a great place to be a smiladon! Well...unless you were a real one trying to eat a mammoth that had gotten stuck. Odds are that you would become a fossil as well.

Here's a pic from inside the museum. It's a wall of dire wolf skulls. There were 10x more predator bones found at the site than prey species. Once a critter got stuck (which only happened about once every 10 years) there would be a parade of predator and scavenger species trying to eat the stuck critter, only to get stuck themselves. 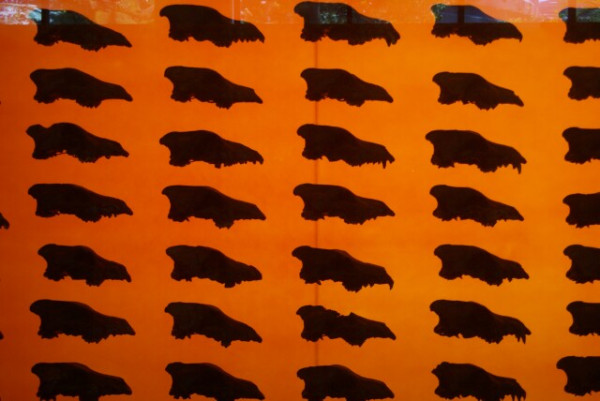