A few weeks ago Kitty and I decided that perhaps it was time to get a kitten to "replace" Boot. We weren't going to actively go to the shelter and look, but rather if the opportunity presented itself, we might consider it. Well, an opportunity came along. A friend's girlfriend's cat just had a litter. Would we want one? We had them bring a kitten over and instead they brought 2, identical twin girls. It took all of about a minute to decide that we would take both. Here's a pic of our new little monsters. 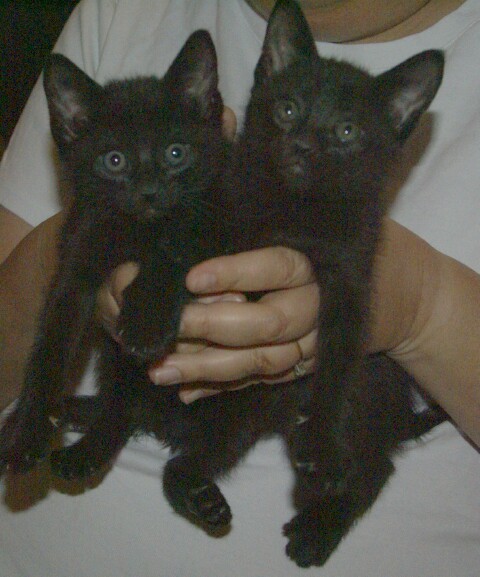 Right now we can't tell the difference between them. There are no distinguishing marks. I gave one the name Butu as something of a joke since this was supposed to be Boot 2 (although the new cat was supposed to be another grey striped tabby). We were going to name the other kitten Bix, but we didn't want to have to explain a somewhat racist name. I opted for K-os (chaos) after the Canadian rap artist. The way she explored the bedroom and pounced her sister made the name apropos. Also we kept saying that she was a handful, and there is a song titled "The Stand" by Mother Mother that has the line, "Oh you are a handful" with guest vocalist K-os replying, "I forgot about handfuls."

Now we just have to hope that the other 2 cats and Mesa can get along with the new ladies of the house.
Collapse