Back in the '70's when I was just a wee cub, my absolute favorite t.v. show was "Emergency." What was a boy of 7 or 8 not to love about a show that had firemen doing cool rescues! Even back then I wanted to visit the fire station where it was filmed. I just had to figure out where there was a fire station in L.A. with a freeway in the back and an oil refinery in the front. That would have taken a lot of research back then. Now that info is just a mouse-click away. I found out that the station was just off the 405 in the city of Carson. It was right on our way from the wedding hotel to Al and Dex's, so we decided to stop and fulfill a boyhood dream. Unfortunately the station crew just got a call as we pulled up, so we were unable to get a look inside. There's actually a sign on the outside of the station dedicating the station to the director of the show because the show did so much positive PR for the LA Fire Dept. and especially the fledgling paramedic program. I even donned Nevada so every time we see the show on t.v. I can say, "Hey! I fursuited there!" 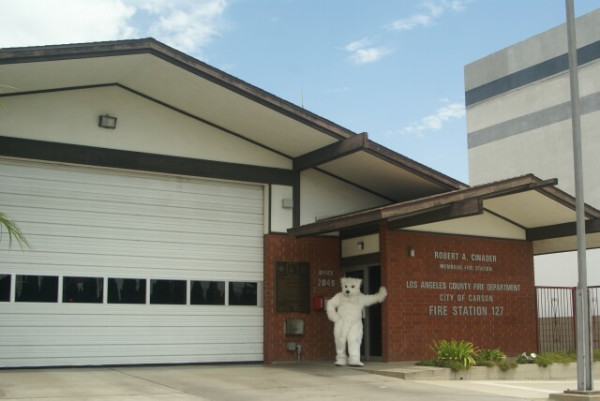