I guess the mantra of the monsoon season is to expect the unexpected. I was sitting out on the patio last night when I heard thunder. Hmmm. There was a small chance of a storm, but we had a much better chance the night before with nothing happening. Soon I was seeing bright flashes to the north. I decided to check the radar. In a matter of 30 minutes or less a nice red blob formed just to the north. It wasn't moving much, but it was expanding. Soon the light show began in earnest. I went back and forth between the patio and the loft, trying to get pics. I was having a rather difficult time with it. Finally I just gave up and enjoyed the show. At one point the heart of the storm parked right over the house. I was freaking out (in a good way) as huge bolts of cloud-to-cloud streaked overhead. It was as if the mothership would soon descend from the heavens. I wanted to go outside and revel in it, but a *FLASH* *BOOM* told me it was better to stay in the relative safety of the indoors. This morning's weather report said that there were over 1,000 strikes recorded during the storm. This was the best pic I could pull off. 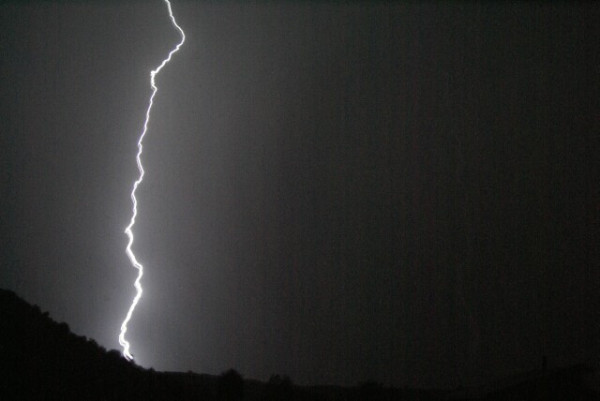