There are currently 4 houses under construction up on the mesa. I thought I would keep track of the order as to which they went up. I found a plat map from the development's planning documents so I can pick out individual parcels. The first house that started seems to have a snag. Perhaps it's just because the contractor took off for the holidays. Perhaps he ran out of money. House #4 has gone up during the time I was away. #2 and #3 are chugging along. I'm not sure what is planned for the large parcel labeled "Unit 18" but there is some major leveling and foundation build-up going on there. Apartments? Condos? A few other parcels are having fill-dirt brought in which will probably have houses popping up in the new year. "Pond 5" is the retention basin that has a park built in it. I noticed today that they did a little more work on it while I was away. They installed steel animal cutouts all throughout the park. I also noticed that they put "fossils" and animal footprints in the concrete walking path. It's a nice added touch. I think I might have mentioned in an earlier post that there is a parcel for sale just above Fur Central with an asking price of $180K+. I suppose they can ask that much because it has gorgeous views of the mountains and the city. I noticed that an average Joe lot is going for about $60K. 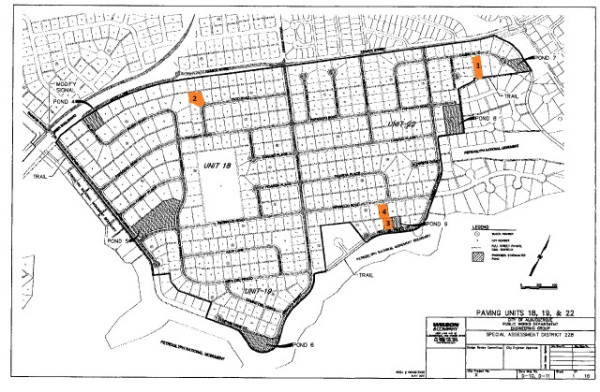