Yesterday was Pearl Harbor Day. We bought the "full tour" package and were told that it would take about 8 hours to do the whole thing. I thought that was pretty excessive, but it turned out that it was a pretty conservative. I had booked our time to the USS Arizona Memorial a couple of months ago, but fortunately there were earlier slots available, so the Park Service gave us a nice bump up in time. Before you board the boat to the memorial you are shown a film about December 7, 1941. I was amazed at how the footage from an event almost 75 years ago still had the power to choke me up. It was amazing that there was a camera running at the exact moment the bomb penetrated the deck to the ship instantly killing over a thousand men. When the movie ended and the the doors were opened for everyone to board the ship to the memorial, there was almost complete silence. There really was a sense of reverence on the memorial. I had heard about oil bubbling up from the ship even after so much time, and I saw the phenomenon myself. You're only allowed about 30 minutes on the memorial, and soon we were back on shore touring the rest of the facilities. It took all day to see the museum, tour the USS Bowfin submarine, and tour the battleship USS Missouri which was the ship on which the surrender documents were signed in 1945. It was then time to head back to the hotel for relaxation with free drinks.

Today was "tour the North Shore" day. We really had no firm plans except to drive around most of the island. The first stop was at the Dole Plantation which I knew was a tourist trap, but I had heard the pineapple ice cream was very tasty. I'm glad I stopped because I saw my first red-crested cardinal which was "made famous" by my buddy

lanakila who loved the bird so much when he visited the islands that he had an awesome fursuit made of the species. We then proceeded north to Haleiwa Beach Park where we took our first real swim since we got here. The water was a bit cool and there were lots of clouds and showers, but it was still fun. The bay was pretty protected so it was easy swimming around. I even got to see another sea turtle as we were checking the place out. We kept going east until we finally got to the famous Waimea Beach. The surf here was MUCH more challenging. The waves were downright scary, but we braved the near shore to get a small feel for the power of the ocean. If someone ever tells me to "go pound sand up my ass," I'll just head to this beach *lol* We continued around the island and had planned on following the shore back to Honolulu, but a wrong turn put us on the direct route back to the city. *shrugs* Oh well.

The Arizona Memorial from the deck of the Missouri. Where WWII began and where it ended. 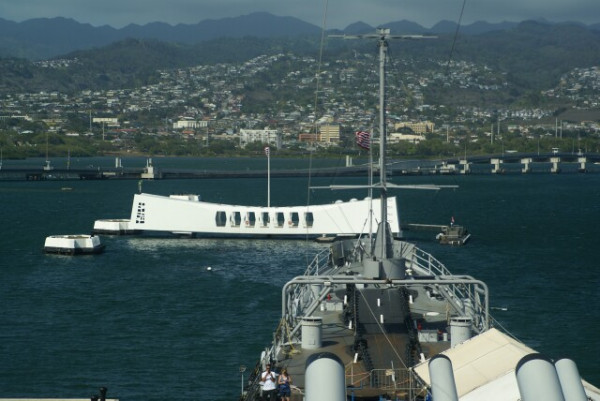 The view from Waimea Beach 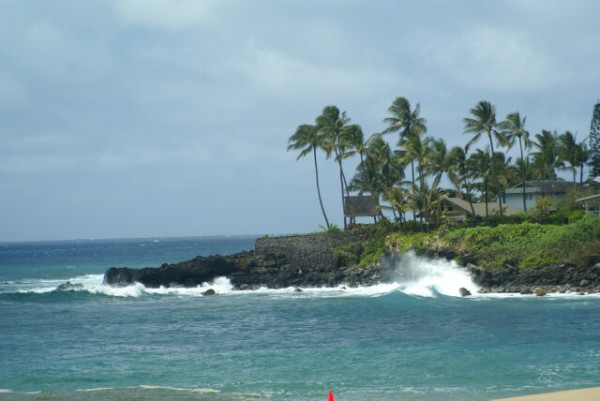