The great FurCentral re-landscaping project began yesterday. I had taken the day off partly to be there to discuss things with the landscaper and partly because I was still feeling like crap from the "coconut crud." As I was walking around the yard with the manager and one of his workers, I noticed the kittens were intently staring at something on the ground in the upper part of the yard. I figured they had captured another lizard or perhaps a mouse. While we were in Hawaii they had brought our housesitter a baby bunny and a mouse, and I have already posted about "dead lizard storage." I continued to talk with the contractor when all of a sudden I noticed something very large get flung into the air by one of the kittens. That wasn't a lizard! I ran to the upper part of the yard and saw that Billie and Diva had caught themselves a snake. I immediately checked the tail and didn't see any rattles. OK. We're down from DEFCON 1. I now had a chance to better take in the situation. The snake was VERY pissed off with a small wound to the head. It hissed at the kitties and the kitties hissed right back. I got a bucket and coaxed the snake into it. I then took it up the mesa a ways and released it. I think it was a coachwhip. What was amusing was that the big macho workers who were doing all of the heavy lifting and demolition kept asking me where I had taken the snake. They wanted to make sure it was far from the yard because they were all afraid of it. Here's a pic of the little guy. 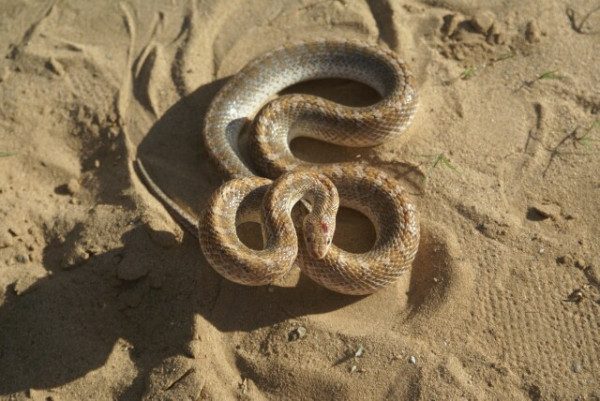