The large brown bear stood on the deck of the aircraft carrier with a pleased look on his muzzle while the LED screen in back of him proudly proclaimed "MISSION ACCOMPLISHED." A white tiger hugged him and whispered in his ear, "You're doing a heck of a job there, Brownie."

Actually I hope things go much smoother from this point on. Kitty and I picked out a new fridge at the Sears Outlet store last night. They actually had the model I was considering, but it had a massive ding in it. It must have suffered a pretty hard fall to get a dent that big in it. Even a $500 discount was not enough to make me overlook that. Instead we opted for one with a freezer on the bottom that someone had refused delivery probably due to a large scratch on the side. Since that side will face the wall anyways, we decided to get it with over $300 off the already discounted sale price. Oi vey! We decided to go with Sears because if we went with Lowes the delivery date would be in a month as opposed to this Saturday.

The other accomplishment was that the yard is now done! The sod was installed and the sprinkler system engaged. Now comes the task of planting. We already bought some herbs for the herb garden and a few tomatoes for the regular garden. I just need to buy emitters for the new drip irrigation system. Pics of the new and improved Fur Central will hopefully be posted tomorrow. I celebrated the completion with a glass of wine on the upper patio at sunset while watching lightning flashes over the Sandias. I think Saturday's party is going to be pretty epic.

OK! Here we have it! Before and after pics of Fur Central!
( Collapse )
I'll leave this pic outside of the cut
The view from the upper patio that makes it all worthwhile: 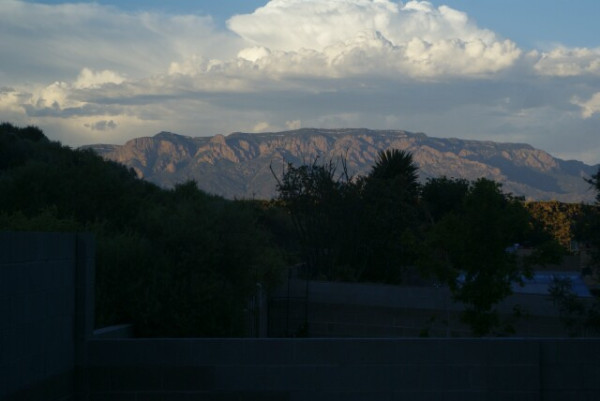