The other day I stopped off at Lowe's to get some light bulbs when I saw a sign saying that all perennials were 50% off. My nose hooked and I thought I would add a little more color to my xeriscaped portion of the upper patio. I bought 3 more plants including a flowering variety with the name of "Jethro Tull." Either I will hear a flute when the wind blows through it or it will eye little girls with bad intent. *lol* While I was planting them I realized that I had never taken a "before" picture of the garden. My goal is to have an "organized jungle" of flowering plants within a few years. So here are pix of what will be considered "year 0" of the garden. What is pictured is mostly the plants my sister brought over in July from her own garden. I bought a couple of plants while she was here and then the ones at Lowe's. I transplanted 4 wildflowers from the mesa and foolishly pulled up 3 of them when they appeared dead. The one that I didn't pull ended up forming a little bush of whitish-pink flowers. I have noticed several desert willows that have sprung up most likely from the willows I planted 16 years ago which are now 20' tall. The biggest plant in the garden is a globe mallow which sprung up most likely from the mesa in back of the house. This year was very good for that plant due to the early summer rains. The one in the garden grew about 6' in 3 months. I noticed the bees were happily pollinating it, so I'm happy. The ultimate goal of the garden is to provide a haven for bees, butterflies, and hummingbirds. So far I have seen all of them getting drinks of nectar.

I should also mention my herb garden. It too has been a great success. The basil plant is now a bush. I made a batch of pesto yesterday using its leaves as well as the leaves from my parsley plant. Tonight I'm making a pork roast and the marinade includes thyme picked right from the garden. I have also enjoyed pseudo mint juleps on many nights while sitting on the upper patio. I grab a few leaves of peppermint or spearmint and crush them into my glass of bourbon. I also have an oregano plant that has spread quite a bit. The only failure was the dill which never established itself. So here are some pix of the xeriscaped garden. Stay tuned for next year's post to see how it has matured! 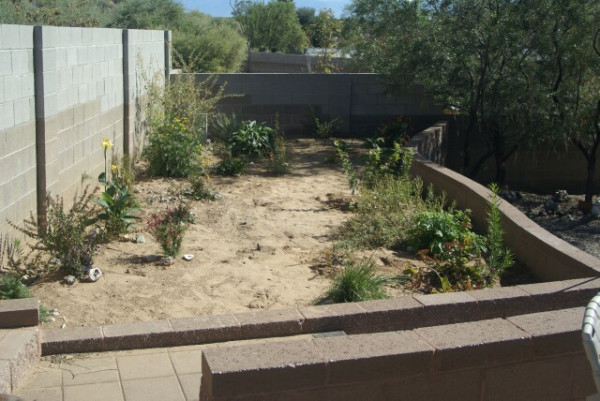 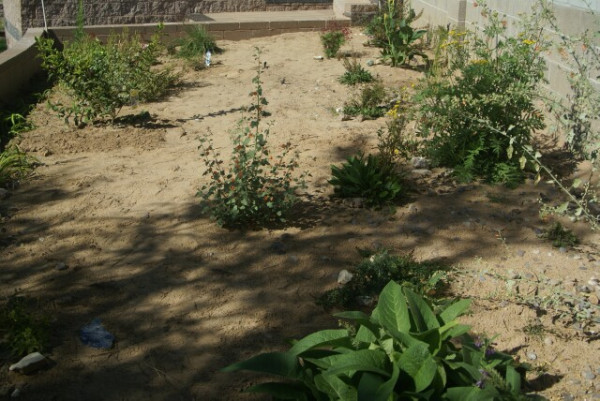