My last post reflected the way I was feeling at the time. I wasn't really happy but I wasn't sad either. The best word to describe my feelings was "meh." Things were just OK. On Sunday, however, things picked up quite a bit. The day started off on a good note as we discovered a new breakfast place. Usually Flames Restaurant was our go-to place. We had already eaten there a couple of times this trip. It's a great breakfast place! But today we tried something different and ended up at Whispers. It was supposedly expensive and pretentious, but that was far from the truth. It was downright tasty and at a reasonable price.

In the afternoon Al decided that he wanted to fursuit. I decided to join him since 2 bears are always better than 1. We only lasted a little while together, however, as I went one way and he another. I ended up in the central lobby of the convention center which was a hub for furries and volleyball players alike. I was happy to be mobbed for pics and hugs. I developed a couple of really good shticks which was a lot of fun. My furriness was being restored! I then had a classic moment as I was making my way to the elevators. I turned a corner just as a little girl, who couldn't have been more than 2, turned the same corner. She saw me and burst into tears. She ran screaming to her mother. I felt so bad! I was going to make it a point to not get in the same elevator as her. I heard her mother console her and tell her that the bear was nice. Soon she was peeking around another person at me. I engaged her in a game of peek-a-boo and in no time the screams of terror had been replaced by squeals of delight. Yay! Score! I still opted to take a separate elevator just to be safe.

I made it up to the room, showered, and then settled in to watch the Packers/Cowboys game. And what a game! Most excellent! While I was watching the game, Al and Dex braved the clusterfuck known as the Art Show pickup. I had already braved the shitshow early in the morning to pick up a piece of art I had bought for Kitty. They opened an hour late and their system was horrible. While Al and Dex were gone, I had decided to treat them to dinner than night at Gordon Biersch. We have been in downtown San Jose for years now, have walked passed the restaurant dozens of times, and yet we had never been. I was going to change that! When we got to the restaurant I was blown away that they had developed a menu especially for FC. My furriness level was finally pushed into the red! Here's a copy of the menu. Hopefully it's readable. 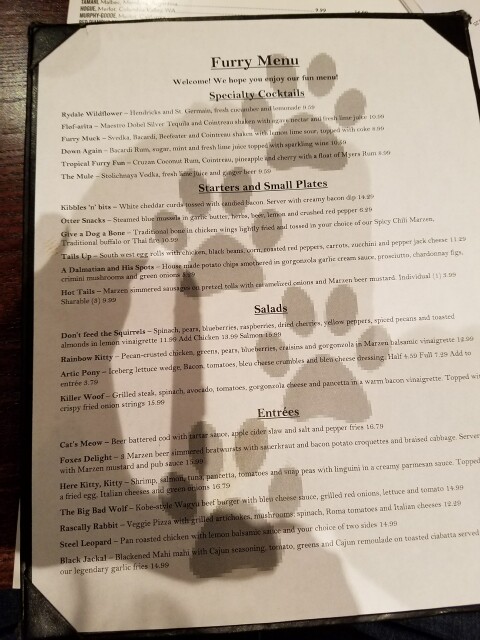 So with that we returned to the hotel with our bellies full of food and beer. We partied with Scritch one more time, and then called it a night. Today we had breakfast at our favorite spot in Gilroy. We then made a stop at our favorite fruit stand where I picked up 20 cent avocados and 20 cents/lb oranges. Al and Dex were bummed that there were no Brussels sprouts this year. And now I'm chillin' in my motel room relaxing before my final leg to ABQ tomorrow.
Collapse