The final piece of the front yard remodel has fallen into place. The whole point of having a front courtyard/patio was to have a secure space. That would require a gate. I could have gone with something cheap and off-the-shelf, but I decided on something custom-designed. I also wanted to show a little "furry pride" but not something blatantly obvious (like yiffing fursuiters or some Wilde-on-Hops action *lol*) And while I was at it, I might as well finally get some good looking gates for the side driveway instead of the eyesore that has been in place for almost the entire tenure of my living there. Here are the results. 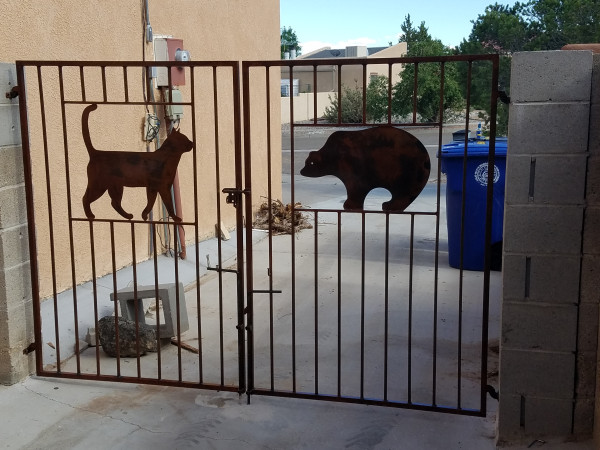 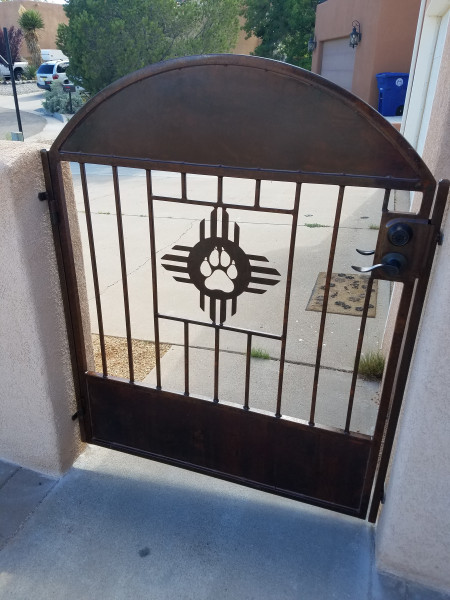 I was going to just have a plain gate for the side driveway, but since I was dealing with a welding shop that could do all kinds of custom art/design, why not add a furry flair! It's also pretty generic so that a future owner would not have to change it. I have seen some custom gates around town with things like the family name inscribed on it. Sure, having "Garcia" might be really cool unless you're sure your kids are gonna stay in the house or you sell it to someone else named Garcia. I have been battling with the side gate ever since the day I bought the house in '99. Actually, when I bough the house there wasn't even a gate at all! I had to construct something to keep Anubis in the yard, so I built one myself using a kit from Home Depot. It lasted intact for about a year. Then the New Mexico spring winds started working their black magic. Within a couple of years it was battered and broken. Add to that the brutal desert sun and I soon had a gate that looked like shit. Finally I replaced all of the slats, but it was only a couple of more years before they too were broken and battered. The final straw was earlier in the year when I wrote about the dust devil that ripped the gate, anchor bolts and all, from its wall. So now I will hopefully have something to stand the test of time. As for the front gate, I once again wanted something subtlety furry. I figured a wolf paw would be very appropriate since the local college team are the Lobos. So you don't have to be furry to appreciate the symbolism. It is my own design, and the owner of the welding shop really liked it. He said that no one had ever asked for something like that, but now that it is in his "gallery," he'll probably get some orders for some. I hope so! Spread the furry love!
Collapse