The eclipse happened 9 hours ago, but my mind is still buzzing from the entire experience. So far the trip has been wonderful except for my little fender bender on I-25 just south of Denver. I swerved to avoid a tard who zipped into my lane and ended up clipping another car. The damage to the Furmobile could probably be buffed out with rubbing compound, but an accident is an accident. Shiiiiit. But the day was salvaged when

eaglem16 had suggested to us. Damnit, Eagle! All of that hard cider was tasty! So yes, that means that my month-long period of sobriety is now over. We all lamented that it was so wonderful to have such a vibrant downtown as compared to ABQ where you have to dodge roving bums and be in fear for your possessions and your vehicle.

This morning we woke up at 5 and went to breakfast in the hotel lobby. It was packed with geeks like us all ready to head north to get to the center of totality. My heart sank as the news from Denver showed that I-25 was already getting heavy all the way to the WY border. By the time we hit the road, Google Maps showed that I-25 was red all the way to Cheyenne. Shiiiiit. I decided to take CO 14 to the east and see how things shook out. I found a small county road that would take us right into Torrington WY which was on the edge of totality. Kitty warned me that geeks everywhere would be thinking like me and would be taking the same route. She was right! It was a continuous string of cars for as far as the eye could see! By the time we connected with US 85, it was bumper to bumper. I had visions of missing the whole thing! We stopped at a rest area to take a final bathroom break, and it too was wall-to-wall people! It was then that I had my moment of Zen and realized that all of this was part of the entire experience. We were all in this together! We chatted with folks in line to the bathroom (which was huge!) and telling people we were furries barely raised an eyebrow. It was awesome! We were part of some huge geeky collective! I kept telling myself that everything would be OK as we progressed to the north. Every mile that ticked off was a mile closer to totality. I was afraid that we would hit some massive backup at Torrington, but we sailed right through. Holy shit! We were now only 20 miles away from the cenertline of totality! We zoomed northward passing dozens of people parked along the side of the small state highway. OMG! It was wall-to-wall geeks! My target was a series of communications towers about 20 miles north of Torrington which would put us about a mile from the centerline of totality. We sailed up the highway right to the spot! We arrived with an hour to spare! I was literally buzzing with excitement! All of my planning was paying off! We put on our solar eclipse glasses and watched the spectacle unfold. The Sun slowly disappeared and I was squeeing with delight. Finally I watched the last bit of Sun disappear through my eclipse glasses and then took them off. There it was! TOTALITY! Holy shit! Words cannot describe the feeling! It was otherworldly! I tried to take picture. I looked at the corona through binoculars. We heard the birds chirping. I saw the "Diamond Ring" and quickly put on Sabot. Scritch quickly took a pic of me so that I could say that I fursuited the eclipse. 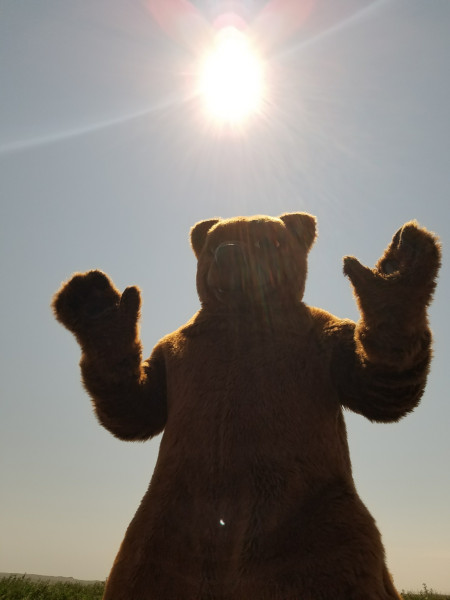 And then it was over. It was like 2 and half minutes of hot passionate sex. I was spent. It was over way too quickly. I wanted more! I had just experienced something incredible and I didn't want it to end. The cows in the field next to us started mooing as if to say "WTF just happened?!?" It was a moment of pure bliss! Our "cigarette after sex" consisted of salami sandwiches as we watched the parade of humanity head back to their mundane lives. Scritch headed south while we headed north for our vacation in the Black Hills. We passed 3 trucks with huge radar dishes mounted to the back of them. They said "NSF" so National Science Federation? Wonder what they were researching. All I wanted to do was get to our motel in Rapid City and crash. I was emotionally spent. But the day was capped off with dinner at a wonderful pub in downtown where we enjoyed pizza and beer. Once again, it was nice to be in a place where there was a downtown area where you could walk around and not be in fear of being accosted by bums. And now I just need to crash and let my brain process all that has happened over the past 24 hours. I'm just glad that I have good ol' LJ here to be able to write down my thoughts.
Collapse