When I was planning this trip to the Black Hills, I wasn't sure how much time I should schedule. There are a lot of things to see and do around the area, but how much time would be too much? I decided to go about planning using only the broadest brushstrokes. We would fill in the rest as we went along. That's pretty much how today went, and the strategy seems to be working!

One thing on Kitty's "must do" list was Mt Rushmore. It was on my "must do" list as well as in must fursuit there. We got up at a reasonable time and enjoyed our kosher (i.e. free!) breakfast. It was then off to Mt Rushmore. It was mobbed with tourists so we fit right in. We walked all over enjoying the spectacle of our larger-than-life presidents in the giant patriotic "fuck you" to the Sioux Indians who we stole the sacred mountains from over 100 years ago. I then got my wish and did a quick guerrilla fursuiting adventure. I knew that I would be mobbed for pics, so the plan was to grab a few quick pics for ourselves and then beat a hasty retreat before bringing down the wrath of the Rangers. Mission accomplished! 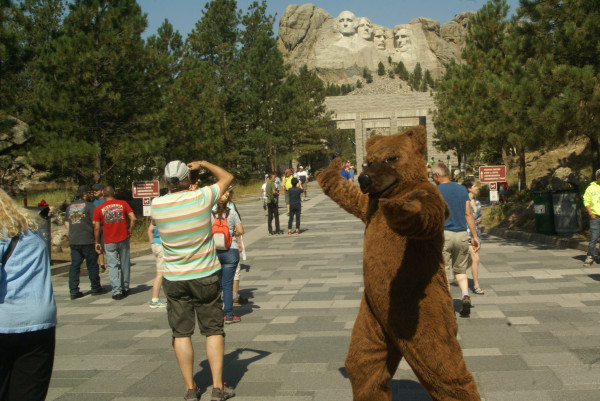 I was still mobbed for pics, but we kept my appearance short and sweet. It was then off to the Crazy Horse Memorial which is the Indians "fuck you" response to Mt Rushmore. I came here with my aunt back in '81 and the work hasn't progressed all that much in 35 years. The cynical side of me thinks it's a money-making ploy by the Indians to keep the tourists flocking in to see the construction while having them stroll through the mega gift store. *shrugs* Maybe it will be completed before I die. It was then a quick drive to the town of Custer where we had lunch at a tasty burger joint recommended to my by a co-worker. Yup. It was one tasty burger! After that we took a leisurely drive through Custer State Park where we saw the scenery and wildlife including deer, pronghorn, and buffalo. I told Kitty the story of my father who took me here back in around 1972. He didn't pay the park entrance fee and wound up getting a ticket when we made a brief stop for lunch. It became a family joke for years after.

It was then time to head on back up to Rapid City. Without trying very hard we had killed almost the entire day. We concluded the day with dinner on the rooftop cantina of a Mexican restaurant. We then strolled some more around the downtown which we appreciated even more. There are independent book stores, record stores, comic stores, gaming stores, and a whole assortment of gift and antique stores. We even strolled down an alley which has been turned over to graffiti artists. It's really a nice little town!
Collapse