Just what the hell does that subject line have to do with today's post?!? Well..today we ended up in Deadwood! And that was one of the more funnier scenes from the HBO series of the same name. The day actually began with a scenic drive down the Needles Highway.

lupine52 made reference to the highway in a comment yesterday and it was just fortuitous that I decided that we should drive that stretch of road today. It has to be one of the great drives in America. The road climbs so steeply that it has 3 loop-de-loop curves where you cross over yourself going around a curve. There are places where the 2 lanes of the highway are nowhere near each other and you're on a one-lane road. And then there are the tunnels carefully laid out so that when you enter them, you have Mt Rushmore directly in front of you. It leads you to an area called The Needles which are a series of granitic spires. It was a truly beautiful drive. We ended up having a picnic lunch on the lakeshore of Pactola Reservoir which I guess is one of ours. I wanted to get information about the dam and reservoir, but due to budget cuts the visitors' center was closed. We then kept heading north to Deadwood. It's a very touristy place with a lot of nice old buildings from the late 19th century. Gambling is allowed there and Kitty tried her paw at a few slots. No luck. We then headed down to the next town of Lead. This is home to the Homestake Mine which is the largest and deepest in America. It bottomed out at an incredible 8000' deep. The gold ore eventually played out after over 100 years of mining operations. It has now re-purposed itself as the center for neutrino research. My little mind can't quite grasp the concept of nuclear physics, but I was still geeking out at all of the science that's going on there. We ended up spending almost 2 hours at the museum. Finally my brain cells needed to be relaxed with some alcohol. We headed back to Rapid City and had dinner on the streetside patio of the Firehouse Brewpub. We finished off the evening with a wine tasting at the neighboring Firehouse Winery. Another successful day!

I had to play with the exposure settings, but this is what it looked like going through one of the tunnels on the Needles Highway 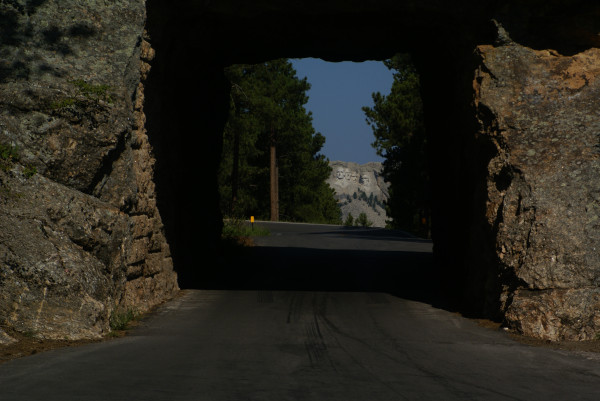 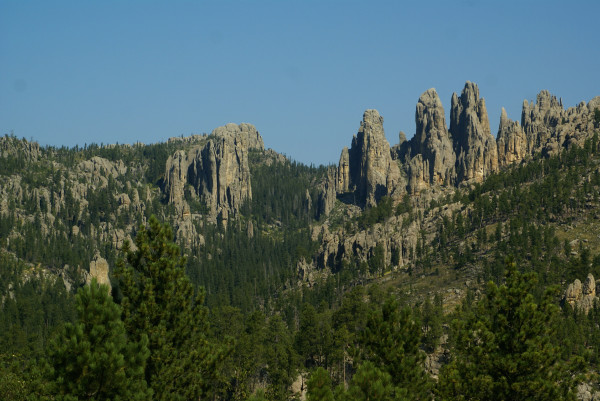 Looking at a cross section of the ore body at the Homestake Pit. The underground workings extend another 7000' deeper and miles in all directions.