Another year and more development has been taking place up on the mesa. In last year's post I didn't give an exact number of new houses that have been built since 2014, but it was around 50. This year the total is 77 with 6 additional houses within the block known as Unit 18 a.k.a. the Tiburon development. Here is the map for the end of 2017. 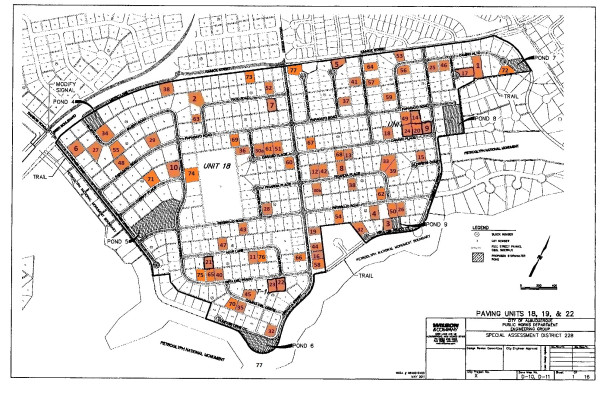 The pace of development shows no signs of slowing. In fact there is another new tract being prepared just to the northeast of this one. Growth is just a fact of life. It also has its good side as well. New stores are opening very quickly all around us. Right near

scritchwuff about 3 miles away there is a new development with a Starbucks, a Verizon store, and a Panera. Most importantly to me will be the opening of a Sprouts Farmer's Market just over a mile from FurCentral. We shop at one several miles to the north regularly since they have great produce prices. Now I'll be able to stop and pick up stuff on the way home from work. Just this year we saw the opening of Flixbrew where you can enjoy dinner and a movie. Next door there is new Thai restaurant that Kitty and I tried a few weeks ago. Yum! There's also a Dunkin Donuts where we have enjoyed breakfast of a donut and coffee. So things are really hopping here on the West Side! Last night we had dinner with Scritch and I posed the question to him as to what he thought about the prospect of having the 2nd Amazon headquarters here. We both agrees that ABQ would be a good choice (especially since Bezos was born here). The cost of living is reasonable. The climate is awesome. We do have an emerging "hipster scene" with lots of brewpubs. I mentioned in an earlier post that we'll soon have a distillery. It just seems that we're on the cusp of something big. Amazon would really push us over the edge. Let's see what 2018 holds in store for us!
Collapse