I know. I promised I wouldn't post about the Oscars until after the show this Sunday, but I read an interesting article in the "WSJ" yesterday that proved I wasn't all that crazy. Every year I try to see all of the nominations. ALL of the nominations. But it could take a year before I get that accomplished. There is a group of folks out there who try to see all of the nominations before the show. With DVD's and online streaming it has become a lot easier. I had to laugh, however, when the most sought-after movie this year was the animated short "Negative Space." We saw it with all of the other short-subject animation nominees, but it is apparently nowhere to be found outside of France. So people have been spoofing their IP address to a French one so they could watch it online. BTW, I re-checked my list of "Best Picture" winners and I am down to 1 movie not seen; "Hamlet." And I just saw that it was finally available on Netflix. So now my new obsession will be to watch all of the Best Picture NOMINEES over the past 90 years. The article said that one of the fanboys had already done that, all 400+ of them. I probably have a pretty good start.

Speaking of Oscar-nominated films, we watched "Jackie" the other day which was up for a Best Actress award last year. It was another example of an actress giving a good performance in a dog of a movie. The other one that quickly comes to mind is Meryl Streep in "The Iron Lady."

Last night we watched "Professor Marston and the Wonder Women" which isn't up for anything, but the plot sounded interesting. It's a biopic of the psychologist who came up with Wonder Woman in the 30's as a way to make money. He was a bigamist who had a manage a trois relationship. They showed clips of some of the "questionable" art that got him in trouble with censors. Sure, he liked powerful women, but he also definitely had a thing for bondage. I guess you have to show a lot of women in chains if you want to then show them breaking free of them. He was also the inventor of the lie detector hence the magic lasso that makes you tell the truth. Oh, and I also caught a glimpse of one of the covers that got me a little...excited. 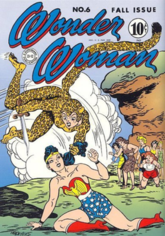 It looks like perhaps Dr Marston was as big a furfag as me!
Collapse