I mentioned in an earlier post that I have been walking around the neighborhood a lot more now that Mesa is gone. I have started to establish little routes that give me a good 1.5-2 mile circuit. One thing I have learned is that I am pretty much the odd person when it comes to livable yard space. I am shocked by the number of houses that have absolutely nothing done to the back yard. The houses in the area are only 30-40 years old, but the houses were still built in an era where there was space between them. This is opposed to the modern approach of filling the lot with as much house as possible. That was one reason why I did the extensive front yard remodel to connect it with the back yard. There is a tremendous amount of space that could be utilized! But as I said, I appear to be the exception, not the rule. It sometimes makes me wonder about the neighbors. There was one house that I noticed several years ago when I decided to walk to our local Mexican restaurant. I peered over the wall and saw that it was completely filled with junk. WTF?!? I thought this was supposed to be a nice neighborhood! I walked by again a few months ago, and this time the front yard was stacked with junk. A week later, however, there was a large dumpster where the junk pile had been. Perhaps a hoarder lived there. I have also found a couple of foreclosed properties as well. Oh well. At least all of my nearby neighbors give a damn and have at least attractive front yards.

EDIT: OMG! I just went to find a Google Map image of the hoarder house. I had no idea that they had 2 old toilets as sort of a gateway onto their back deck! 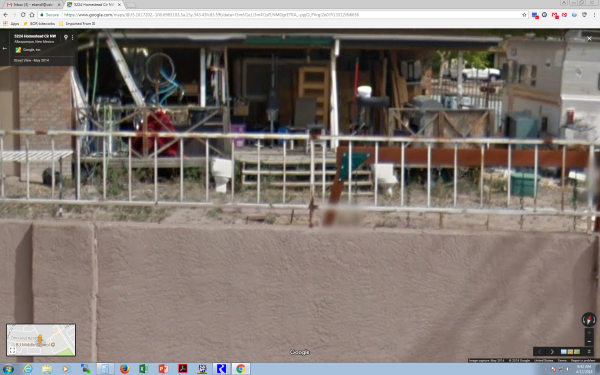