No. Sorry. Not a post about the Robert Redford/Paul Newman movie. Last night Kitty and I were sitting out on the patio. I had kicked my shoes off and was just chillin.' I walked over to Kitty and it felt like I had stepped on a goat head. He have this annoying grass that grows profusely around here that puts out little spiky seeds about the size of a split pea. We also have "true" goat heads which is also known as "puncture vine" since that's what happens to your bike tire if you roll over them. So I went to pull out the "goat head" and didn't find anything. I looked on the patio and saw that I had not stepped on a goat head, but I had stepped on a scorpion. I've lived in the desert for 25 years and this is the first time I ever got stung. Shit! I even collected scorpions when I lived in Yuma! I would go camping in the desert with my black light and bring back a whole assortment of the little buggers to a research scientist who was studying them. I had 2 as pets for a couple of years. These were the honking big Desert Hairy ones where the venom was pretty mild, but just the size of the stinger must hurt like hell. I would even bring back centruroides also known as bark scorpions that DID have a fairly toxic venom. I just loved the thrill of the hunt. Supposedly I found a unique species and had it named after me, but I can't find any record of it. Perhaps it was later deemed just a subspecies or a variant. I did find some rare specimens which helped define new territories/habitats. And I knew that we had some that were native to NM. Usually they stayed out of the house, but I think Anubis got stung on the paw once. He was sitting right in front of me when he jumped up and started sniffing the carpet. I found the little fucker and dispatched it. There was also the one that got trapped inside a light fixture with a cockroach. It was hilarious to watch the roach scrambling around wildly while the scorpion just tried to hunker down to avoid the much larger roach. And then there was the one from last night. I gave it a quick hit with the flashlight and that was that. This morning I stepped on a spine from some plant and it hurt worse than the sting. I have also been stung in the head by a wasp which hurt way more. So I guess that's another checkbox achieved under "living in the desert." Oh, and here is a pic of the little bastard. 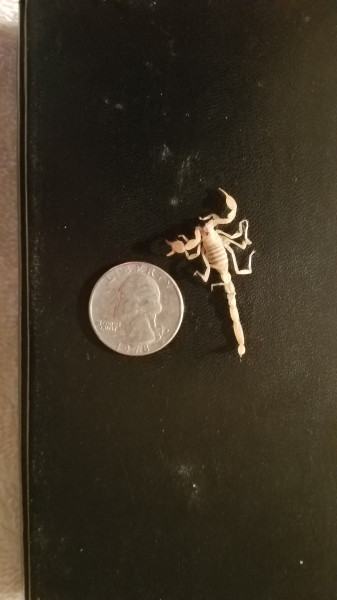