Last year I made a post about the development up on the mesa. 2017 ended the year with 77 houses either completed or under construction. This year the total is 95. There are also a few more houses in "Unit 18" a.k.a. Tiburon. I don't include those since the lots aren't individually parceled out on the map. So here's this year's map: 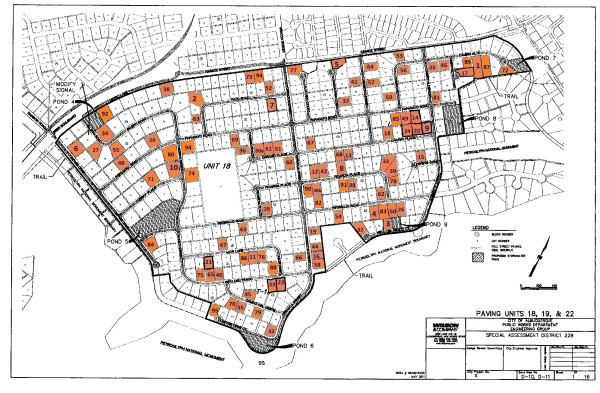 I actually toured one of the houses this year (#63) which had a unique modern design. I think it was going for about $600K. It had a master suite probably as big as my entire upstairs area. Where the house failed miserably was that they didn't install balconies on the upstairs, and the house pretty much filled the lot. This is in contrast with houses such as #71 or #80 which have HUGE back yards which is currently just wasted space. If you know anything about all my posts about Furcentral and my outdoor spaces, you know that I HATE wasted space! At least house #80 has a pool, but it's tiny compared to the lot. I also walked around #82 while it was under construction. They had an interesting design with an interior courtyard. I liked that concept. There are already a few lots with preliminary work done on the lot in anticipation of building, so 2019 will probably be another strong year. There is a new development to the north of this one and building has already started. At least it's a sign of a strong economy.
Collapse