I'd have to check in the old LJ archive to see when I last posted about one, but for the first time in over a decade I ran into a rattlesnake on walkies. It was on the path going from the back of my house to the top of the mesa. I was on my way back down when I heard something like the rattling of leaves. I immediately looked because it sounded like something moving through the underbrush. It was actually the snake giving me a short rattle. I whipped out my phone and took a couple of pics (no selfies!). I then started back on my way. It was that motion that got it concerned and it immediately assumed the attack position. Don't worry, buddy. I ain't gonna fuck with you. It never did give a full-on angry rattle. So now I'm paranoid once again about the cats. Seeing that it has been so long since I have seen one, hopefully I won't see another for another decade. 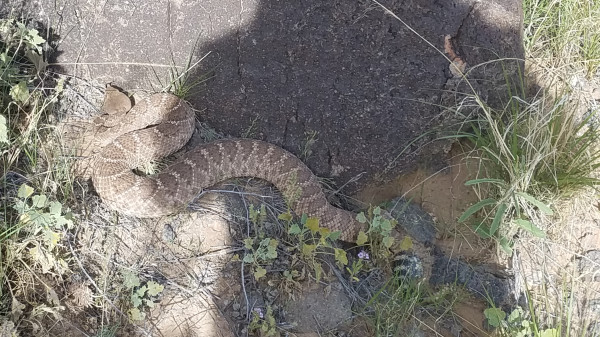