Awhile back my supervisor was planning a big field trip for mostly people in the southern part of the Rio Grande Project. I was asked if I wanted to go, but I declined. I had already seen most of the sites. I would just be taking up space. But a few weeks later I was asked again since there were slots available. So I said, "Sure!" It would be like a 3-day vacation. Of course I would be called upon to share my expertise at certain sites.

So we left on Tuesday on a large chartered bus. We stopped at Cochiti Dam which is an Army Corps of Engineers facility, but one of the only dams actually on the Rio Grande. We then stopped at a few key measuring points which have been recording data for over 100 years. We ended up going over the Taos Gorge Bridge which is one of my favorite places in the state. We spent the night in Alamosa. In the morning we headed to the headwaters of the Rio Grande. There is a reservoir up there owned by the local irrigation district. It certainly was a beautiful place. The aspens were already starting to change colors up at 9000'. 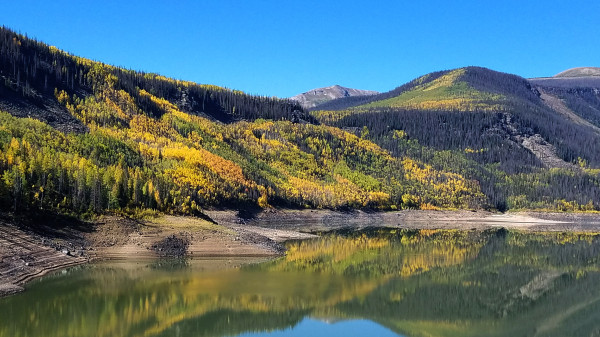 We toured a few more important measuring sites in Colorado, and ended up at a snow measuring station that is one one I use the data from to predict inflow into our reservoir. It was great to finally get to the site since I had never been there before. We spent the night in Chama.

The next day we toured an important system that brings water from the Colorado River Basin into the Rio Grande Basin. Unfortunately all of the snow that fed the system has been gone for over a month now. We ended up at one of our reservoirs where I got to flex my muscles. I have been releasing water from the dam for over a month. The water I needed to move was all gone. So I had the manager shut down the release. When asked why he was doing it, he pointed at me and jokingly said, "Because he told me to do it." It reminded me of that Spiderman quote; "With great power comes great responsibility!"
Collapse