*sigh* It's with heavy heart that I am posting that I fear my beloved Fling is lost. She would make the fifth cat I have lost over the past 20 years. She disappeared last Wednesday, and it really pisses me off. We were leaving for the Blue Man Group and Yoink and Diva ran in when called. Fling ran to the door and played, what we call, "ha-ha." That's when the cat makes every indication that it wants to come in, but at the last second turns and runs away. You try to pick it up, and it goes just out of your reach. She pulled that shit with Kitty. I went out to grab her, but she ran around the side of the house. We decided to just leave her and get her in after the show. We never saw her again. The most logical explanation is that she ran into someone's garage and got locked in. She did that with the neighbor's shed last year. People have been checking when we ask. No luck. I had mentioned that there seemed to be more coyote activity as of late, so there's always that possibility. I don't know. I'm just giving up hope. Of course there was a story on the news the other day about a cat that was chipped and the owner was tracked to Portland OR. He said his cat had been missing for a few years. How it got to ABQ is anyone's guess. Fling was chipped and has been reported to a national database. So there is some hope. I'm also thinking about buying locator chips for Yoink and Diva. The GPS units on the market have a major flaw in that the battery life is terrible. The simpler ones are essentially range finders. But at least it will let us know if they're hiding or trapped somewhere. 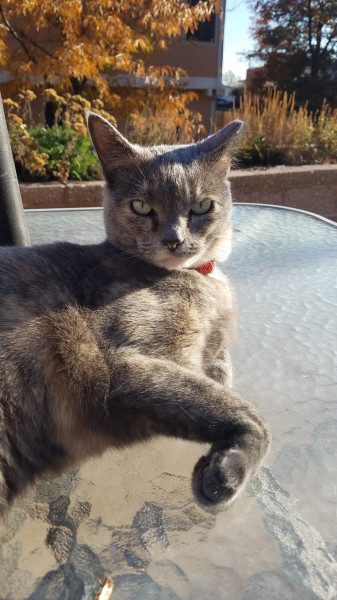