OK. Here it is! The cruise post with pics!

11/21: We flew from ABQ to FLL via HOU. Our connection got delayed, so any plans of meeting up with

dexter_fox for dinner were ruined. We ended up at a German place just down the road from our hotel. Google said they were open util 11:30, but they closed at 10. We got there at about 9:55. Oops. But they were nice and we got a tasty dinner with beer!

11/22: Finally met up with Al and Dex since they went to a Wendy's near our hotel. They went back to their motel and we went back to ours. We would meet up again on the ship a few hours later. Check-in was a breeze. Had a nice lunch, then it was time to put our all-you-can-drink cards to good use. The problem was that everyone else had the same idea since nobody could get to their rooms. Finally we got the "all clear" and everyone headed to their rooms. It was then easy to get some drinks. Finally we got settled in and went to explore the ship, especially find all of the bars. 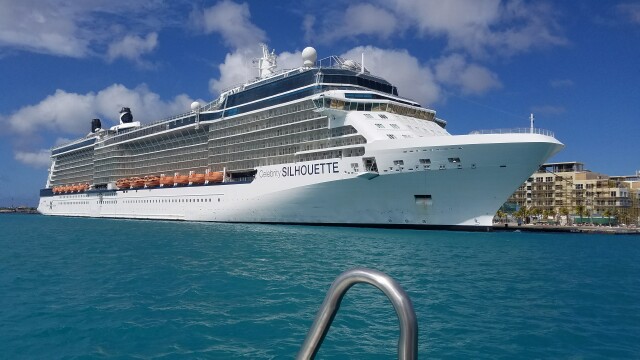 11/23-24: These were days at sea. That meant find a comfy place near a bar and drink and chill. I finally experienced total relaxation. My mind finally cleared where I did not have a care in the world. I had no shame in spending an hour staring at the waves. We saw one of the ship's shows which was enjoyable. We thought we would see more, but we never did. Our favorite bar became the Sky Lounge at the front of the ship. Our second favorite was probably the Ensemble Lounge which was nice and quiet with a good selection of bourbon. The Martini Bar became a favorite either before or after dinner. 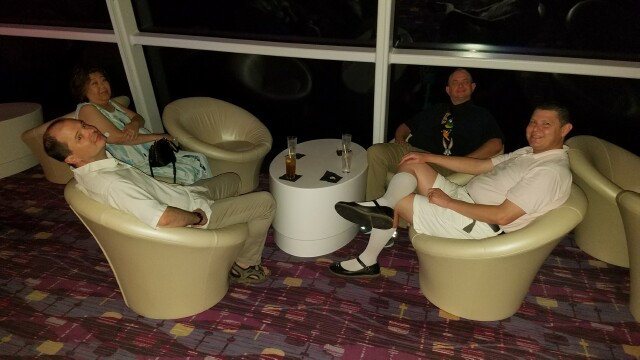 We had a shore excursion planned here. We had a snorkeling adventure. The first place was pretty good, but I have experienced much better. The joy was floating into a school of several hundred (thousand?) little silvery fish. 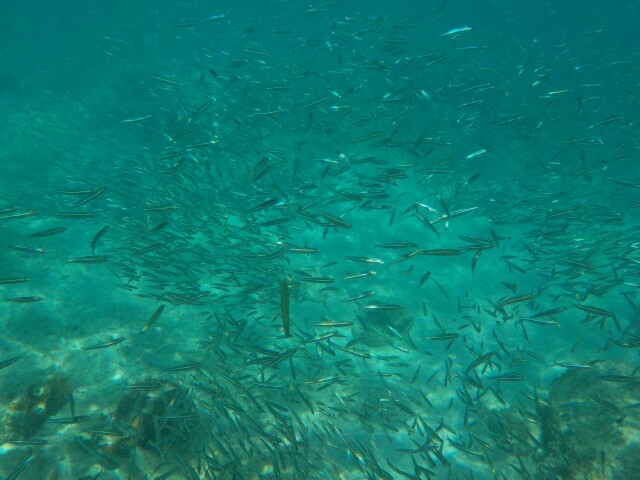 There were also some unusual corals which were home to small schools of fish. 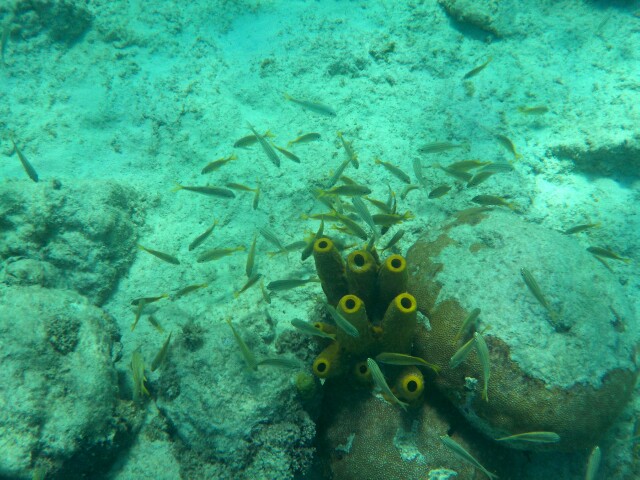 We had time to explore a little bit after our excursion, so we just walked around the downtown a short distance. We found some fun photo ops. 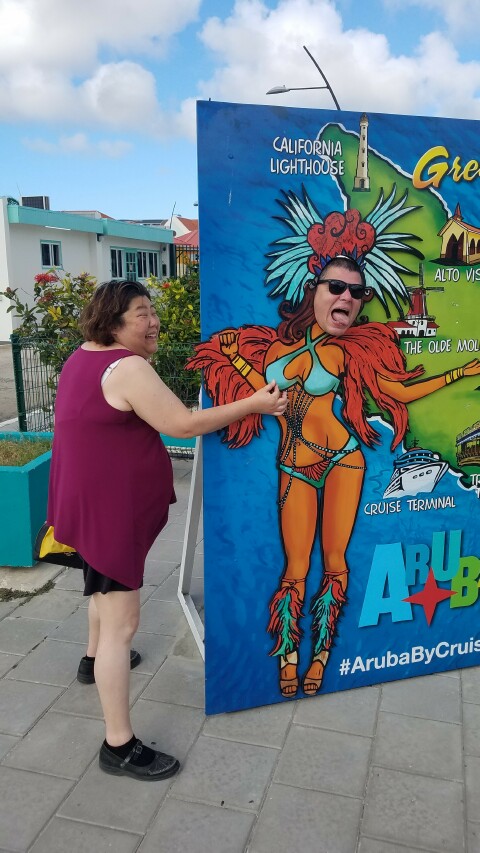 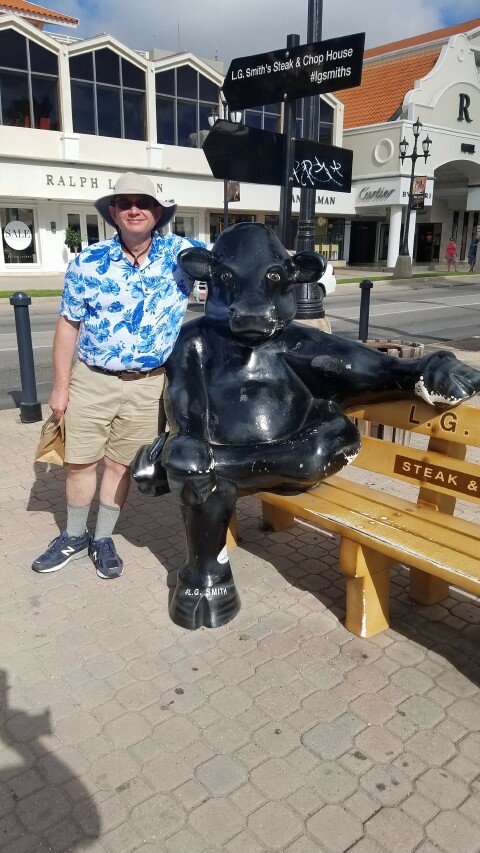 11/26 Curaçao:
Al and Dex booked a snorkeling excursion, but Kitty, Scritch, and I just decided to wander around the downtown. There were some nice historic buildings. We toured the nautical museum and learned about how the port was a major center of commerce (mainly slaves) as well as a major naval base as the great powers of Europe fought over colonial possessions in the 18th century. At one point Kitty headed back to the tourist area while Scritch and I headed deeper into the more "native" population center. "Animal House" quote: "Boone! We're the only white people here!" But at least we got to feel more of the true island. I didn't think twice about taking an alley back to our ship which was the shortest route. 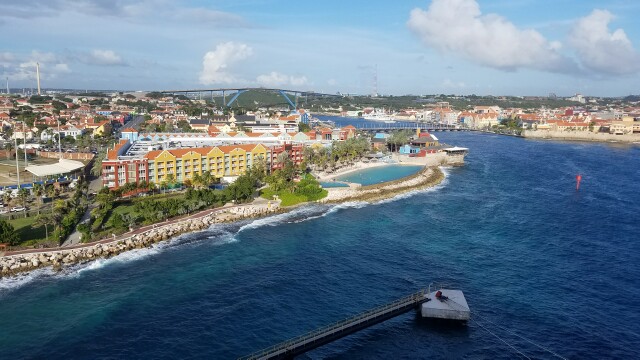 11/27 Bonaire:
We had an eco-tour scheduled for this island. It got us away from the major tourist center, and we got to see how the locals lived. It was probably the least developed of the islands, and we were told that the focus is really to maintain a more natural ecosystem. We took an inflatable boat across a lagoon into a mangrove forest. While it was nice, there wasn't a lot of wildlife to be observed. About the only cool wildlife we saw was a flock of flamingos on our drive in. 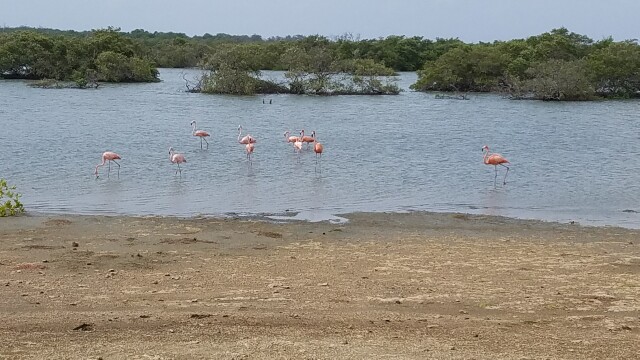 I also caught a glimpse of a couple of parrots in a tree, and that was about it. We then went back to the tourist area and walked around a bit. One of the highlights of the trip was witnessing the security of the road leading into the tourist area. It consisted of an old man sitting under a tree holding up a rope stretching across the road. 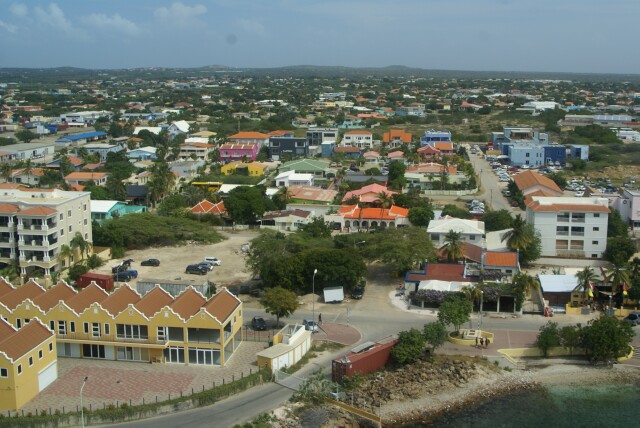 11/28 Thanksgiving at sea
A nice relaxing day of eating and drinking. Yes, we were able to have a traditional Thanksgiving dinner with turkey and fixings. The only fail was that they ran out of pumpkin and pecan pies just as I got to the station. What was nice was that they started getting the ship decorated for the upcoming holidays. It added to the festive mood. 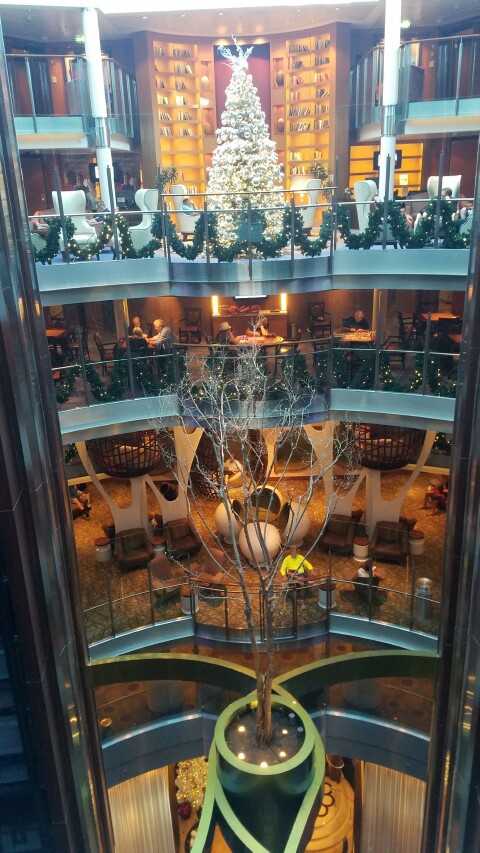 11/29 Grand Cayman
Scritch, Kitty, and I had booked an excursion to have a dolphin encounter as well as an opportunity to swim with wild stingrays. Of course when Albear heard about swimming with stingrays, his response was "Oh, hell no!" He had visions of Steve Irwin in his head. Plus just before we left there were over 100 people stung off the coast of Huntington Beach. So he and Dex did their own thing.

The dolphin encounter was totally touristy and exploitative to dolphins, but we didn't care. It was a complete money scam in that they made tons of money selling pics of you hugging or kissing a dolphin. I just thought it was cool to be able to get that close to a dolphin. They seemed to be very well cared for, and I sensed the devotion of the staff to the health ad well-being of their cares. Since I refused to fork over money, no pics.

We then took a boat into a nearby bay where there was a sandbar where the crystal clear waters were only 3-5' deep. All around stingrays swam around looking for a handout. The site has been popular for decades, so they were used to people. Our guide would coax one up into his arms and then gently guide it into your arms for a photo op. It was wonderfully thrilling to be in such close contact with these gentle creatures. I just pointed my waterproof camera under the water and snapped off pic after pic hoping I would catch something worthwhile. This was probably the best shot even though I did get some really incredible close-ups. 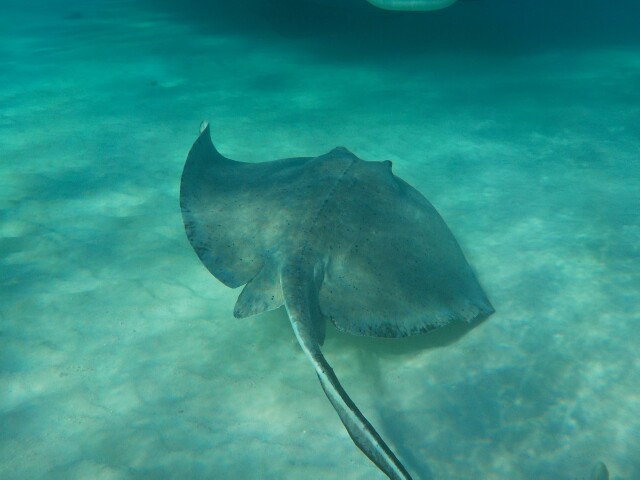 I wasn't all that interested in holding one, but one of he guides slid one into my arms while Scritch grabbed a pic for me. No yiff was involved. 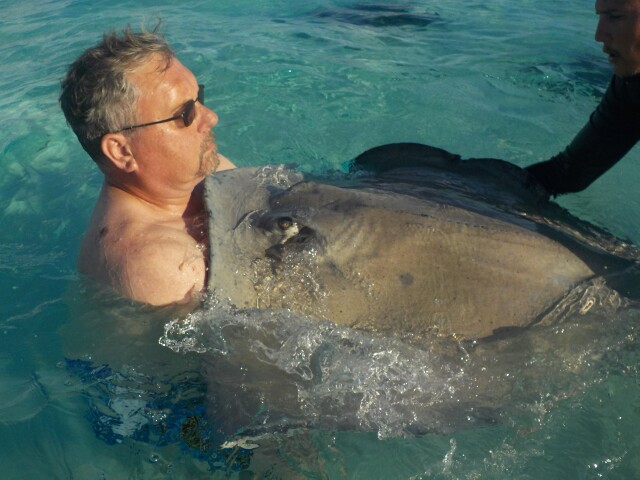 11/30 The last day at sea. Another day to kick back and eat and drink. We packed up and got ready for disembarkation the next morning.

12/1-2 The cruise line screwed up and brought us back to Miami instead of Ft Lauderdale. Of course we knew beforehand, and Kitty had made an arrangement to take us back to FLL. It was a good move since we heard that the shuttles arranged by the cruise line was a shitshow. We got to our hotel in FLL and just chilled until our rooms were ready. We then explored the beach. We found that one of the best ways to see the area was to take a trolley 2 miles up the beach and then just walk back. We introduced Albear to Primanti Brothers which we had discovered at AC over a decade ago. Different location but same great pastrami sammiches!

12/3 Scritch, Kitty and I flew home. Al and Dex would stay another day to save even more money on airfare. We saved about $600 by spending two extra days after the busiest travel day of the year, even with the hotel factored in.
Collapse