A few months ago

mondhasen made a post about a band from the 70's or 80's (sorry. forgot which one). But I mentioned the Alan Parsons Project as a band that I liked but really couldn't admit such since prog-rock/soft rock was "old people music." It just wasn't cool. Eventually I came around to admitting I really liked it. Their video for "Don't Answer Me" came out while I was in college. Once again, it wasn't hip or cool, but the video was fun to watch. Perhaps it was also my time in eastern Oregon where all I could pick up was KBOI, AM radio from Boise that played nothing but soft rock. You'll happily listen to that when you're 100 miles from the nearest town. But I digress.

Right after I made that LJ comment I saw that he would be coming to town! I might not be a superfan, but I could certainly give props to such an influential person of the music industry. We're talking about the man who produced one of the greatest albums in rock history, "Dark Side of the Moon." His concert would be held at one of my favorite music venues, so I bought tickets. Kitty was a little unsure. She knew a couple of his songs and hated one of their biggest hits ("Time"). But she would give it a shot.

I had a feeling it would be an older crowd since his biggest hits came out 30 years ago. I was right. We fit right in. He does have a new solo album coming out, so he played a few songs from that. Fortunately I had checked out YouTube before the show, so I knew the songs he played. Mostly he and his band played the big hits of the Project. During the first part of the show, however, I felt like I was watching a cover band. It was an interesting situation. Alan was most at home behind the sound board. He was a musician, but not really a vocalist. In their heyday they almost never toured. So who exactly were the 7 other people on stage with him? They were talented musicians, but they were not the original band. Even then the "original band" was a collection of studio musicians. I decided to not overthink things. During the second act the band seemed to tighten up a little and really rock out. By the end of the show Kitty had been won over. We were both happy to have seen the show. 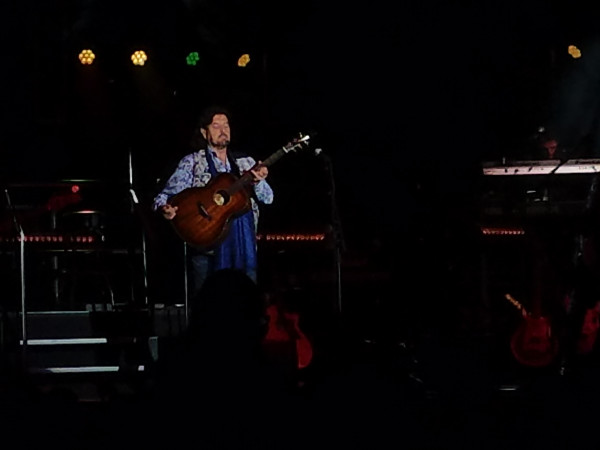